Rain Wetting Thirst, featuring artists Luca Bosani, Jocelyn McGregor & Sheila Rennick and curated by Séamus McCormack explores how taste, identities, aesthetics and class culture and made manifest through absurd images, fragmented forms and complex genders. It considers how disembodied bodies can be (re)presented, and how commodification through popular culture and particular contexts and stimuli can blur our individual sense of self. Caricature and satire are used by these artists to create conflicting identities, asking how sensations of desire and aversion can occupy the margins between intimacy, repulsion, fetish and fantasy. Various moments of awakening – erotic, alarming, frightening, arousing and liberating – question the fluid nature of identity. The three artists in the exhibition set up situations that aim to question how our desires, represented by fragrances, images, words and actions, might be satisfied but also remain unfulfilled, thirsty even.

Scaffold, a group exhibition at The Bomb Factory Art Foundation, that explores issues related to our use of digital technologies and how this engenders a sense of detachment, thus examining how this may lead to manipulating or polarising opinion and sense of self. Works on show will consider how the material disintegration of images and information, of pixilation and surface breakdown, can confound meaning and truth. Kate Fahey’s practice explores embodied experiences with contemporary screen-based, techno-scientific images, reimagining bodily presence in the military’s highly mediated representation of warfare online. Adam Gibney’s works highlight the relationship between scientific uncertainties and the anxious state we sometimes occupy. Jonathan Mayhew is interested in moments when edges blur and ideas of ourselves along with the world around us are ruptured. The artists explore absent bodies, barriers in communication and aim to find a voice within the noise and complexities of digital scaffolds. The exhibition aims to question the function of systems we use to disseminate and consume content in the digital sphere and what happens when these processes are undermined by glitches that can be detrimental in our understanding or interpretation of them. 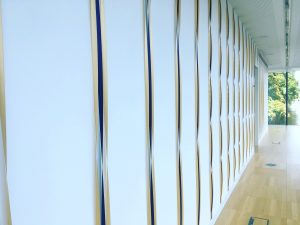 This exhibition borrows its title from an architectural construction ‘The Jealous Wall’ which was built in the midlands of Ireland in Mullingar, Co. Westmeath, c.1760. The wall is a celebrated and spectacular folly and was designed as a sham ruin epitomising the eighteenth century interest in Gothic artifice. Using concepts, ideas and themes that the structure, its history and form suggest, the exhibition brings together artists’ practice that explore the baroque, illusion, memory, site and architectonics and features a range of works in various media including installation, video, sculpture and drawing.

Artworks have been selected that suggest and visualize follies, fallacies and artifice in both architectural structures and biological and neurological architectures and systems. Concepts of the anti-monument and subjective or fictional association are juxtaposed with works exploring technological models of classification.  The exhibition included artists: Miranda Blennerhassett, Niall de Buitléar, Janine Davidson, Adam Gibney and David Eager Maher and was curated by Séamus McCormack for the Luan Gallery. 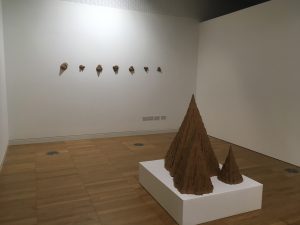 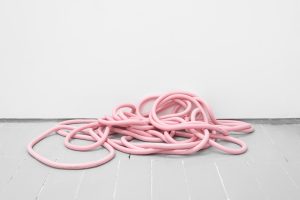 Sausage Fest is an exhibition by UK based artists Jemma Egan and Sheila Rennick curated for ArtBox by Séamus Mc Cormack. Through their diverse practices, questions of taste, aesthetics and class culture are explored through painting, sculpture and moving image where both artists investigate cultural identity through a contemporary lens.  Rennick’s paintings based on screen-grabs from online dating applications feature male figures presenting themselves to potential suitors. In stereotypical representations of hyper-masculinity and bravado, each man is depicted in Rennick’s distinctive loose and free styling. Her lurid and unrestricted technique undermines each of the characters’ supposed confident stance.  Alongside these portraits is a painting of of a pair of discarded female underwear, perhaps a trophy of a past sexual conquest, an image to allure and arouse, or an imagined interaction.  Egan’s sculptural and video works are derived from specific sources references and images based on fast-food products. Like Rennick, Egan explores question of taste, instant gratification or the quick fix. We are fed a diet consisting of mostly pork products, which has obvious sexual connotations, banger.  A video work of a pussy’s tail seductively swaying from side to side further implicates the viewer.

Rather than looking from the outside, both artists are rooted within the context and culture they are referencing, so despite hints of satire and humour, there is still a certain affinity with the subject-matter. Together Egan and Rennick demonstrate a palpable interest in what lies between what we might desire or hold in disgust. Furthermore, the work included in Sausage Fest not only alludes towards sexuality, but pokes at our abject and engrained needs. 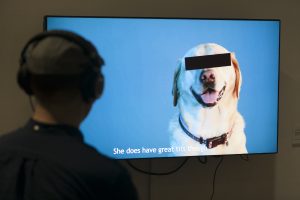 ROADKILL at The Irish Museum of Modern Art is an exhibition and performance evening that featured Jenny Brady, Sandra Davoren, Elaine Leader, Eoghan Ryan, Smilin’ Kanker and Przem SHREM Zajac curated by Séamus McCormack.  Essentially a footnote to the ‘Primal Architecture’ exhibition, ROADKILL presents alternative, opposing and contradictory explorations of instinctual and primal concerns. The project presents a diversification of propositions exploring themes of framing, duality, structure, sexuality and appropriation, and the artists involved employ devices such as collage, remix and disruption. 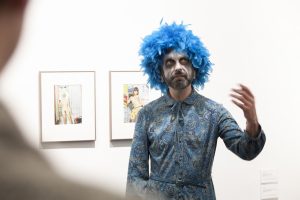 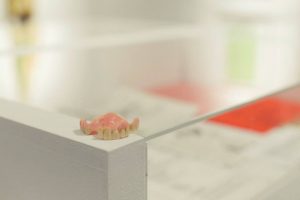 Mobile Encounters presents a selection of ephemera and artworks documenting the early years of performance art in Ireland.  The exhibition is curated in partnership between the National Irish Visual Arts Library (NIVAL) and IMMA. NIVAL is a public research resource that holds the world’s largest collection of documentary information on Irish 20th and 21st century art.   Drawing on both national collections, the exhibition traces the people, organisations and events that contributed to shaping a culture of ‘mobile encounters’ for performance art from the early 1970s to the late 1990s.  I initiated and co-curated this project with Jennifer Fitzgibbon and Mark Maguire for the Project Space at the Irish Museum of Modern Art.